Unfortunately, the roots of the name “Herchenbach” have never been profoundly established. Whereas the second part of the word, “Bach”, is a common word meaning “brook”, “Herchen” does not have a meaning in contemporary German.

Several theories exist:
• One traces the word back over “Herken” to Celtic and translates it as “dirt”. So Herchenbach would mean “dirty brook”.
• Another one ties a connection to “Herger”, a word supposed to mean “fighter” in the middle ages: First the place owned by a “Herger” would carry that name, later the people settling there.
• A completely different approach is to phonetically link the word to similar names, not asking for any special meaning in the first place. The old first name “Hericho” is one possible origin.

So it is not even clear whether it was people, a settlement or a brook whose name first contained “Herchen”. Furthermore, “Bach” may have been derived from a different word despite its present meaning: “Bracht”, for example, refers to a piece of land that has been marked for clearing or other preparation for agricultural use.

Interestingly, the name not only comes up around Neunkirchen, but also in other regions. The only local village of Herchenbach, though, ceased to exist in 1950, when it was incorporated into the neighbouring “Feld”: 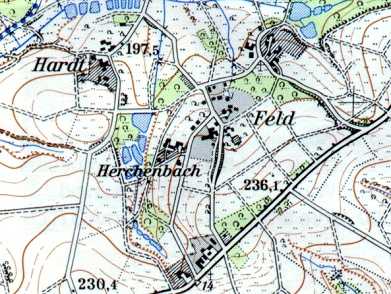 So this tiny place may have been the origin of the great Herchenbach clan. Whereas some left for the New World and unlearned the name’s “correct” ☺ pronunciation, others hold the fort to make the original sounds prevail: